A downloadable game for Windows, macOS, and Linux

DeliveryRL is a 7DRL entry!

DeliveryRL is an attempt to flip some common roguelike patterns around. Instead of wading your way through a pile of monsters and gore to steal an artifact and escape, instead you're trying to slip by the denizens of an ancient dragon's lair and deliver a pizza before it gets cold. DeliveryRL tries to offer some alternatives to combat, hopefully making you feel a bit more like a runner and less like a warrior.

Welcome to DeliveryRL! You are a typical delivery person for a most unusual pizza shop. Sometimes your store gets orders from mythical creatures. Today an Ancient Dragon has ordered a pizza and expects it to be delivered promptly, and warm! Why does a dragon need delivery? It's not your job to ask those questions, but you drew the short straw this time.

Race to the depths of the caverns and deliver the pizza to the Dragon who is waiting. Survive by avoiding monsters, fighting for your life, and distracting them with some extra food you brought along. You also have a special trick up your sleeve, the ability to warp a short distance. It tires you out but don't let that slow you down; time is of the essence, after all! Maybe you can scrounge up something useful from past adventurers, but remember: even though you can teleport you're no warrior!

You will find the dragon on the 10th floor!

Check out the README. Everyone should be able to run the windows exe build via wine (x64 wine prefix). The linux binary may or may not run as is. To run it you need SDL2 and SDL2_image. Feel free to let me know if you have any issues. Also feel free to compile from source (build tag 1.0.5 for the 7DRL version).

Game size on versions before 2.0.2

Version 2.0.2 and onward have an ingame size control and resizeable window. If you're a version before 2.0.2 and the game the game is too small for you display you can increase the size by specifying a new font information on the command line. You can find all of the choices by listing the contents of the assets/font directory. The default is cp437_12x12.png.

On Linux you can pass the arguments to either delivery-rl or delivery-rl.sh, depending on how you run it:

And on windows you'll need to supply them on the command line:

Thanks so much to irskep for helping me provide an OSX build during the 7DRL competitionn. You will still need to install sdl2 and sdl2_image but then you should be able to run DeliveryRL from the OSX archive in the downloads below. If you can't get that to work please consider downloading the windows+linux archive and trying the wine version before giving up!

I now have an OSX build running on free travis-ci osx infrastructure!

This game was built from a prototype example game I developed a few months back so I am starting from an existing "engine" I have that has a bunch of prototype systems. It needed an immense amount of polish and all of the things added (and removed) that makes it this game and not just a game where you wander pointlessly through a procedurally generated dungeon.

Definitely one of the best games on this 7drl. I would change heroism potion from 2d4 to 1d2 though. At first I was thinking that it only restores stamina and that's all. But with such huge boost even a couple of heroism potion makes your character too powerful. 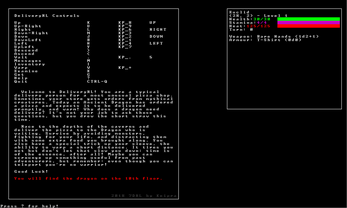 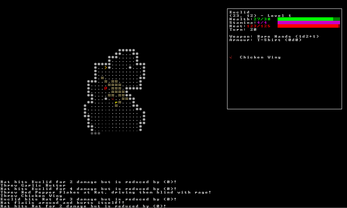